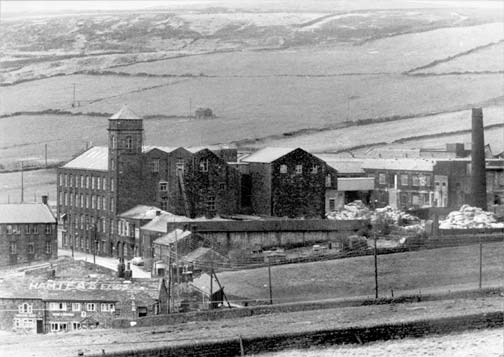 Allan Harris of West Yorkshire was diagnosed with mesothelioma, an asbestos related cancer, in November 2017. As is usual, his doctors asked him about his work history but Allan could not remember being exposed to asbestos in any of his jobs. The only contact he could recall with asbestos was from Cape’s Asbestos Factory, Acre Mill, in Hebden Bridge.

With the help of Fozia Hussain, Allan’s case settled for a six figure amount without issuing court proceedings.

Allan, his mother and brother moved to the village of Old Town above Hebden Bridge in Spring 1948 when Allan was just a little boy. The family were invited to Old Town by Allan’s maternal aunt, Ella, who worked for Cape as a spinner.

Allan’s exposure to asbestos was typical of many children who lived in the area during that period.

Allan attended Old Town Primary School. He would play in the playground a short distance away from the factory’s main drive where lorries laden with asbestos materials and and waste drove by. Asbestos fibres floated about in the air, clinging to the wire netting surrounding the playground like strands, collecting in heaps on the ground where unsuspecting school children made snowballs to throw at each other playfully.

Allan caught a bus to Hebden Bridge to watch a film at the Picture House. He would catch the bus from outside Acre Mill, standing and huddling with his brother or friends under the extractor fan that spouted asbestos waste into the air. Allan walked to school with his brother and on cold winter mornings they would try and get warm under the fan.

He would go into the post office to spend his money which mill workers also visited, leaving asbestos debris and dust behind.

However the unusual feature in Allan’s case was that he visited Acre Mill between the ages of 10 and 12 on a regular basis to pass messages to his relatives. Allan’s aunt, Ella, worked for Cape as a spinner. Soon enough other aunts joined the family in Old Town and started working for Cape too along with their partners. Allan’s three aunts worked as spinners. He recalled his uncles working in different parts of the factory including the warehouse and pipe making department.

Understandably, Allan couldn’t describe in detail the processes that went on in the factory being only 10-12 years old at the time but he did have a vivid recollection of pipes being made, loaded on a trolley and being put in ovens. Allan would have been exposed to substantial amounts of asbestos dust produced by the manufacturing process.

Allan’s case settled without having to go to court because his solicitor, Fozia, had years previously acted in a very similar case against Cape and succeeded. Tragically, that case was for a former Old Town Primary class mate of Allan’s.